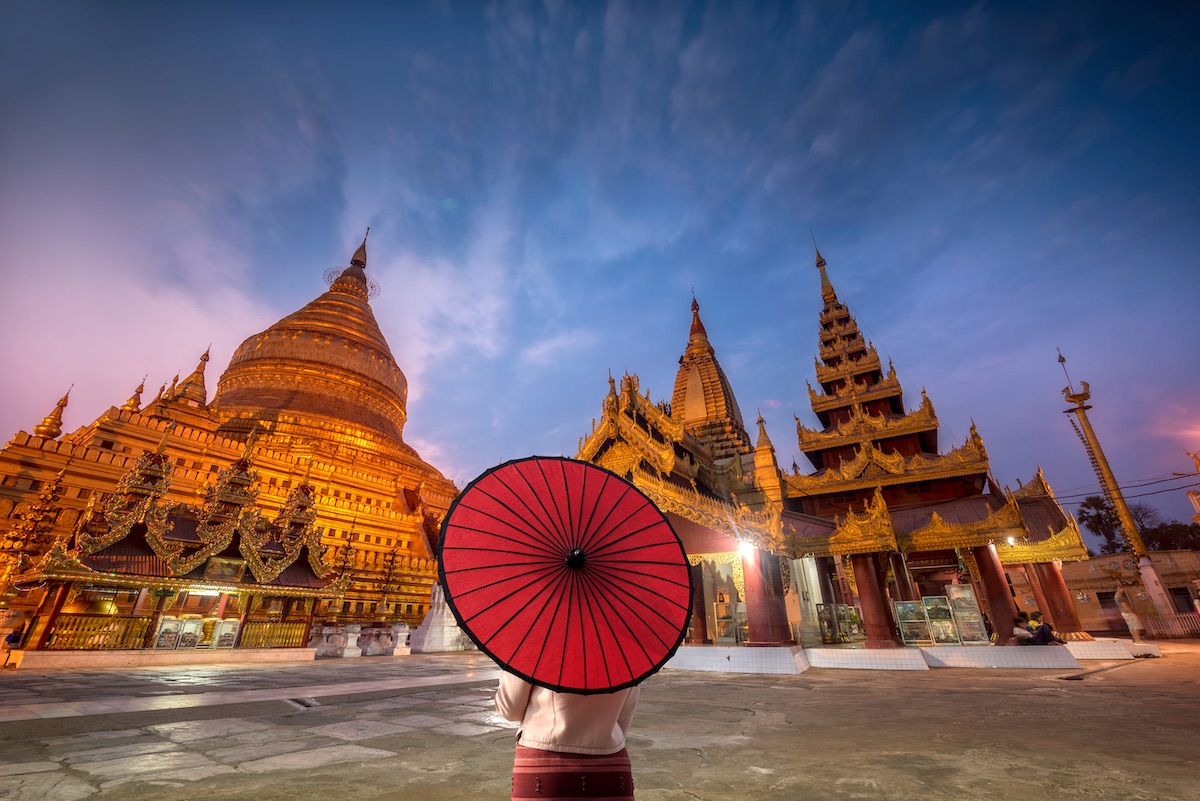 5 Places to visit in Myanmar

Myanmar is the largest country in South-East Asia but one of the least visited in the region. Its obscurity as a travelling destination is due to the nations frequently unstable political situation. The country has experienced the longest civil war in the world with ethnic conflict still ongoing in remote areas. Most if not all tourist destinations are very far from these hot spots and tourism itself is on the rise, with over 3 million arrivals in 2018.

People from all over the world flock to see the simply astounding temple complexes of Bagan (the largest archaeological site in the world) and Mrauk U, the majestic pagodas and bustling street life in Yangon, Mandalay and Naypidaw, the dazzling and pristine beaches, lakes and national parks and some of the most hospitable and welcoming people in the world.

The largest city in Myanmar (and capital until 2005), Yangon is a vibrant metropolis. The city presents a unique and eclectic mix of traditional and colonial architecture. The commercial core of the city (that includes the largest number of British colonial buildings in South-East Asia) straddles the magnificent and central Sule Pagoda.

While the Sule Pagoda functions as a hub and central meeting point for Burmese of all strata, the Shwedagon Pagoda serves as the most important pilgrimage not only of the city but of the entire nation. This wondrous monument, a 99m gold covered stupa is reputed to be more than 2000 years old and is one of the world’s most sacred Buddhist sites.

Yangon is also the primary entry point for visitors to Myanmar (through Yangon’s International airport) and for domestic tourist sites by air, train and bus.

Located in the Mandalay region and founded in the second century AD, Bagan (also known as Pagan) was the capital of the eponymous kingdom. During its heyday, the city counted to 200.000 inhabitants and was one of the most significant and powerful settlements of the region. This can be seen by the sheer quantity of stupas, pagodas, monasteries and temples (3822!) surviving in the Bagan plains.

Balloon rides over the site are a truly mesmerizing experience and a great way to cover the enormous distances. Some of the most renowned sites that stand out between the literally thousands of different structures are: the Dhammayangyi temple, the Lawkanada pagoda, the Shweizigon Pagoda, the Tharabha gates, the Htilominolo temple and the Mahabodhi tower. Bagan also serves as the Burmese centre for decorative lacquerwares. Watching the artisans work using traditional methods dating hundreds of years has become a huge tourist draw in itself.

One of the most popular tourist destinations in the country, Lake Inle is a large freshwater lake situated in the Shan state. Tour guide led boat rides wade through the enchanting villages positioned on the lake’s banks and in the lake itself. The unique living style of the Shan, Bamar, Intha and Danaw people, the intense and colourful religious festivities (especially from August to October), boat races using the traditional “one leg” rowing technique and the vibrant market scene all make for an exceptional experience.

A huge majority of the inhabitants of Lake Inle are devout Buddhists and self-sufficient farmers (growing distinctive vegetable and fruit gardens that float on the lake) and fishermen renowned as being some of the most hospitable people in the world. There are a growing number of hotels, hostels and guest-houses available as accommodation.

Both located in southern Rakhine State on the Bay of Bengal, these are just two of Myanmar’s incredibily underrated beaches unspoiled by mass tourism. With 2000km of uninterrupted coastline in a tropical setting it makes sense that the country would have an abundance of gorgeous beaches. Though the infrastructure is lacking in many areas compared to other tourist hotspots in the region, (Thailand, Vietnam and Cambodia come to mind) the appreciation of Burmese beaches is steadily on the rise. These two localities were voted in the top 10 best South-East Asian Beaches twice in a row.https://www.instagram.com/p/B4op3FElpkH/

On the other side of the country at the meeting of the borders of China, India and Nepal is Putao, the northernmost town in Kachin State. The remoteness of the area means that flights to the region have to be checked much in advance (as planes to the area will only depart with a sufficient number of passengers). Isolated by hectares of jungle from the rest of the country, Putao is located in a unique position in a sub-tropical region at the feet of the Himalayas. Despite its isolation the village offers a number of trekker-friendly lodges and guesthouses.

The district has an astounding variety of endemic animal and floral species and its biodiversity ranks as one of the highest in the world. Its position makes it a favourite of hikers as it is one of the few places where one can make out snow-capped mountains while being immersed in a jungle. This includes the highest peaks of the country, Mount Hkakabo Razi and Mount Gamlang Razi (there is an ongoing dispute on which summit is higher).

Our list finishes but it has to be said that the destinations mentioned barely scrap the surface. Myanmar offers so much more (its difficult political situation notwithstanding). From the Golden Rock Pagoda to the pilgrimage site of Hpa An. Tourism can actually be one the best ways to help the local economy after so many years of strife.

As a last point there is an incentive to practice ethical tourism in a country still controlled in most aspects by a military government. This can be done by interacting extensively with locals (including staying in guest-houses as opposed to state owned hotels, taking local transport instead of state-owned planes, relying on local tours and spending money in local markets). Tourism still brings huge benefits to this wonderful country and hopefully this will mean better conditions for all Burmese in the near future.