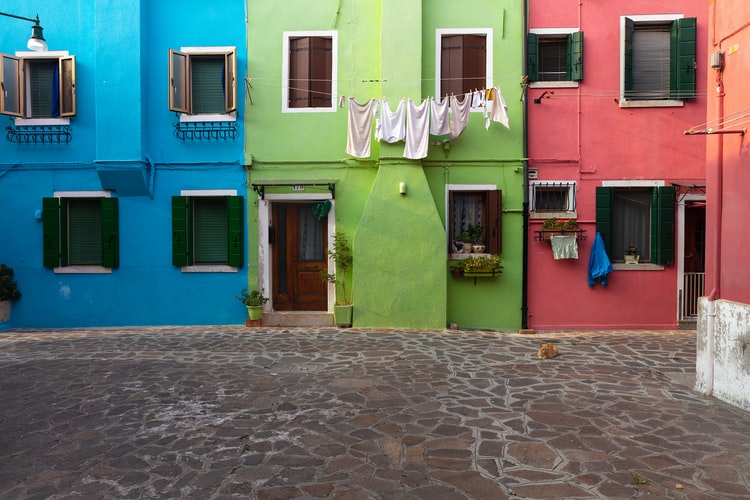 Burano is one of the main islands of the Venetian lagoon, known throughout the world for its brightly coloured houses that confer a magical pastel like quality to the town. Together with Murano (famed for its intricate glasswork workshops) and Torcello (thought to be the first inhabited island of the lagoon) it is one of the most famous destinations of the Laguna Veneta (outside of Venice obviously).

During the barbarian invasions that followed the fall of the Western Roman Empire, the inhabitants of Altino, on the Italian shore (or “terraferma”) initially fled to six islands in the Venetian Lagoon: Ammiana, Costanziaco, Mazzorbo, Murano, Torcello and Burano.

The first inhabitants of theses isles built their houses on stilts covered in reeds laid deep into the silty mud of the lagoon. As the ages passed and the groundwork became more stable, stone was used to reinforce the buildings, walkways and bridges coasting the canals.

How to get there

Burano can be easily reached by “vaporetto” from Venice (the Fondamenta Nove stop) and the quaint beach localities of Punta Sabbioni and Treporti. The cost of a ticket is 10€ and the time to get there is around 20 minutes from each of these destinations. There are a number of all-inclusive guided tours that offer stop-and-go sightseeing excursions to the many “lesser” islands of the lagoon.

Once off the vaporetto, we find ourselves in a small square greeted by the “Attesa della Pace” sculpture by local artist Remigio Barbaro, known throughout artistic circles for dedicating his life to sculpting (his house is now an open museum). The road to our first stop, Fondamenta San Mauro, is bound on both sides by bars, ateliers, shops, and eateries.

There is no real itinerary to choose in Burano (being a small town of not even 3000 inhabitants). The best manner to savour the town is to lose yourself in the maze of basalt-paved “calli” in between the radiantly coloured houses. Just like its much bigger sister Venice, Burano is divided into five quarters or “sestieri”, these are: San Mauro, Giudecca, San Martino Sinistra, San Martino Destra and Terranova.

The beating heart of Burano is Piazza Baldassare Galuppi, and thus cannot be avoided. Amongst the main sights is the church of San Martino Vescovo. Inside the chapel is a priceless work of art commissioned in 1745 to one the greatest venetian artists: Gianbattista Tiepolo. The bell tower of the church is the curious Campanile Storto (or “crooked belfry”). The foundation on which it was built has been slowly sinking for centuries and thus the 53m tower is tilted on its axis by about 1.8m!

On the other side of the plaza are two elegant palaces. The first houses the Museo del Merletto, a museum committed to preserving the town’s secular lacework tradition. The second edifice is the town hall, graceful in its simplistic but stately venetian style.

The painted houses of Burano

What obviously stands out most in this small fishing village is the vivacious colours of almost every single building. Legends say that the fishermen coloured their houses in lively primary colours to see them from afar and cheer them up during long fishing trips in the foggy dread of the lagoon. The real reason is the different colours between houses served as an original method of marking property.

Another theory states that the different colours symbolize different family units. There is some truth in this as the number of local Buranese surnames is almost as restricted as the number of existing colours. As is common in other areas of Veneto, the limited pool of last names gave rise to a myriad of different nicknames to tell one from another. For example in nearby Chioggia, on the southern part of the lagoon, the predominance of the Boscolo and Tiozzo surnames (that make up about 30% of the 50000 strong population) brought new laws in which nicknames are used as official names, even on driving licenses and passports!

Out of all the coloured houses, one stands out. The house of Bepi Suà is a Burano landmark, the dazzling geometric forms were painted on its main façade in the years following WWII utilizing every possible pigment. The owner of the house, the titular Bepi used to hold an open-air cinema in the small plaza adjacent to his fantastically coloured abode.

Despite its small size Burano is also noted as a gastronomic centre Veneto. Notable “osterie” include: Al Fureghin, Riva Rosa, Ai Pescatori, Cafè Vecio, Da Primo, Da Forner and many, many more. Although fish-based cuisine is obviously the staple food, Burano is also renowned for its donut shaped bussolai pastries and its risotto di gò, a creamy risotto eaten in a broth made from fried gudgeon (called gò in venetian dialect, a typical fish of the lagoon).

Its small size notwithstanding, Burano is still affected by the high intensity tourism that stems from Venice. The tiny town centre can be jam-packed in warmer seasons and this can take away from the experience greatly. A handy travel tip would be to pick autumn or springtime as a general timeframe in which to visit not only Burano but the many other fascinating sites that the Adriatic coast of Veneto has to offer. As for best time of day, late afternoon and early evenings, after the bulk of the guided tours has packed up and left is often ideal time to admire a gentle sun setting on the still waters of the lagoon.