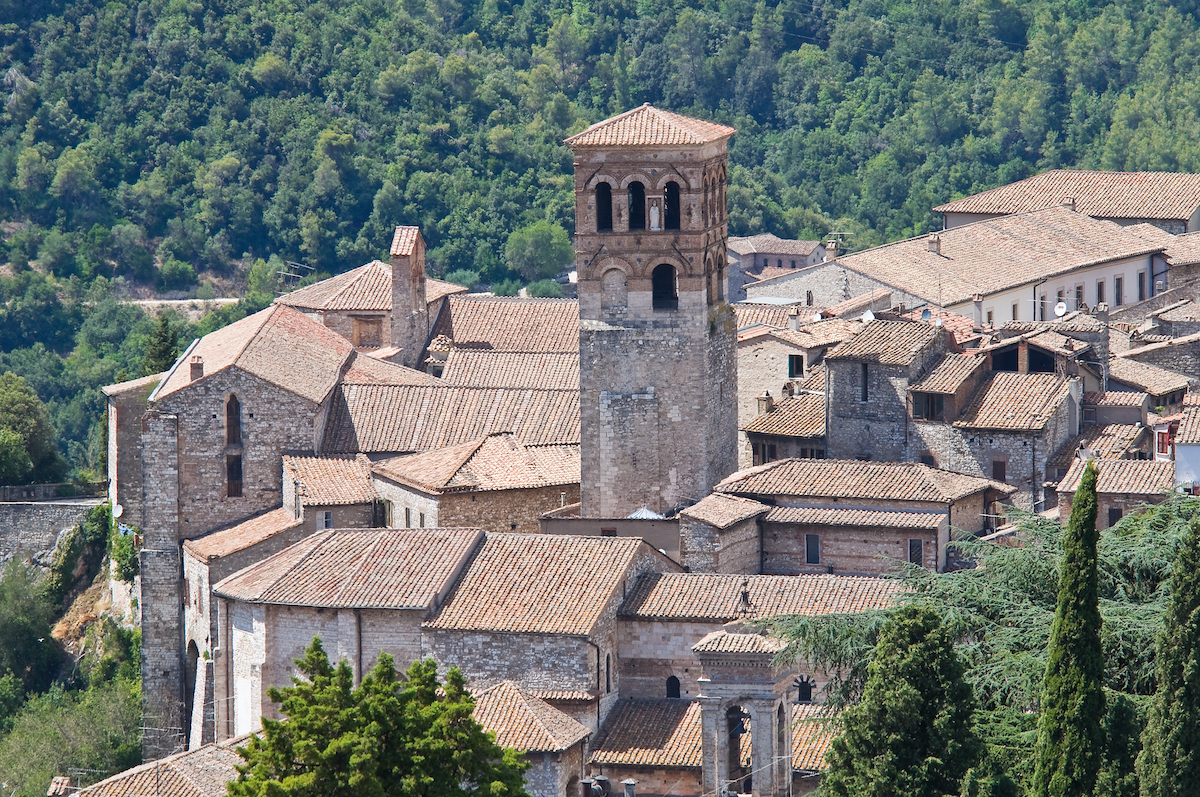 The story goes that when a colleague of C.S Lewis asked where he had come up with the name for his imaginary world in the wardrobe, the author showed him an atlas of ancient Italy with the name of a small town underlined. The town is Narni, then still presenting its Latinised name Narnia, famous in Italy for being its exact geographic center, while being famous internationally for giving its namesake to one of the greatest fantasy stories ever told.

While the author never actually visited Narni, strange coincidences pop up when discussing this connection. In 1979 a group of young children accidentally stumbled upon the entrance to a whole underground system of interlinked chambers and cellars dating from the Roman period. This complex is now known as “Narni Sotteranea”, which can be explored in its entirety from its entrance through a tunnel starting in the church of San Domenico.

Umbria, Narni’s region, is one of the most under-appreciated in the country. This is also due to its relative isolation. It is the only landlocked region in central Italy and its terrain is almost entirely hilly. Due to its geography and past as part of the volatile border region between the Papal States and the independent city-states surrounding it, many towns in Umbria are built on top of hills in defensive positions, distinct in culture, dialects and traditions from their counterparts in Tuscany, Lazio, Marche and Emilia-Romagna.

The first landmark while still winding up the road arriving to Narni is  the “Ponte di Augusto”. An impressive example of Roman bridge situated at the crossroads of the ancient Via Flaminia the 2000-year-old road that links Rome to Rimini. Narni is difficultly accessible by both car and public transport. It relies on elevators to get to the actual town. The local population uses these elevators even for the most basic goods, with the only supermarkets located at the base of the hill in neighboring Narni Scalo.

Not to worry though, the old town has many local stores or “botteghe” where one can find many of the essential foods of the region (Umbria is famous for its prestigious pork and boar hams), including: Capocollo, Guanciale, Porchetta from nearby Norcia, Umbrian Mortadella, Coppa, Brasato and many, many other savoury delights.

Through the year the town alternates between busy to almost deserted, though tourists and a detached campus of the University of Perugia keep things lively. This liveliness becomes palpable in late April and early May as the “Corsa dell’Anello” takes place. Narni literally becomes a time machine. The locals don medieval costumes and participate in the titular race, which features jousters in full medieval armor attempting to drive a lance into a ring.

The town’s main landmarks include the regal Palazzo dei Priori, the abbey of Saint Cassiano, the Duomo (the main cathedral of the town) and the massive Rocca Albornoz, a truly majestic fortress famous for resisting countless assaults. The story behind this massive citadel is indicative of Umbria’s history of defending itself against invaders. From Terni to Perugia, passing through Spoleto, Gubbio and Norcia. Egidio Albornoz, who gives his name to the stronghold, was a 14th century cardinal and “condottiero” (general) of the Papal states and the man responsible for fortifying the whole region with a system of connected castles that protected Umbria for centuries.

The relocation of University students to the once sleepy town set the stage for a burgeoning nightlife scene to develop in the area, with a myriad of bars mostly situated around the two main piazzas. One locale that stands out for international travelers is the Seven Pub located in a narrow alley shooting out of Piazza Dei Priori. The bar is massively popular with both students and tourists also thanks to the charms of the owner, Fabrizio. A rarity in Italy, the barman is an expert in all that is beer (it must be mentioned that Umbria is something of a beer enclave surrounded almost entirely by wine country). For more beer but also cocktails, we have the slightly trendier Bar Arcomincio in Piazza Garibaldi.

Narni and nearby Narni Scalo as well as the neighboring municipalities of Orte and Amelia enjoy numerous spots for both fine dining and street food, especially during local festivals. Il Kantuccio, Il Gattamelata and La Loggia are three of the most appreciated in Narni proper. This last establishment is renowned for its diligent preparation of “manfricoli” a type of pasta reminiscent of Emilian “tagliatelle” but thicker.

Being a University town at the crossroads of Italy, closer to Rome (0nly 80km) than the regional capital of Perugia (85km), Narni has many optimal low-cost hotels, hostels and bnbs, many offering excellent homemade cuisine. For hotels we have the Hotel dei Priori and Hotel Narnia both starting at a modest 40€ per night. For hostels consider Ostello Sant’Anna, a reconverted 13th century convent located close to the entrance of underground Narni offering spectacular views of the surrounding landscape, at 30€ a night it is obviously one of the most popular choices. Out of all places to see in Italy, Narni is definitely worth a visit in its own right. However, it can be also a launching pad for full immersion in Umbria, northern Lazio and southern Tuscany.