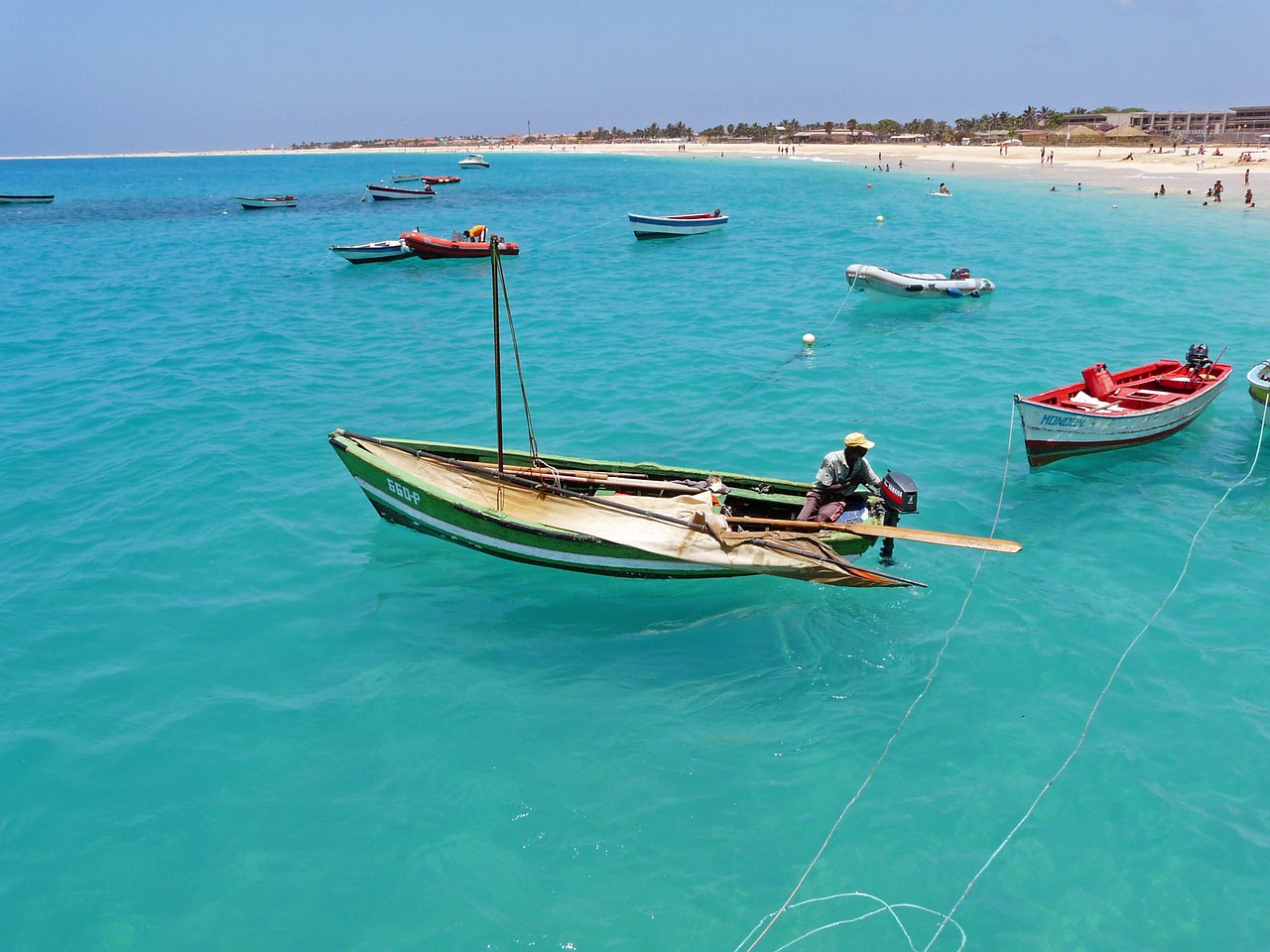 600km off the coast of Western Africa, isolated for centuries from the rest of the world lies Cape Verde, an archipelago as enchanting as it is unique. This chain of islands, part of the Macaronesian region (which includes the Canary Islands, Madeira and the Azores) were virtually unknown as a tourist destination until the last two decades. Things are rapidly changing now as this small island nation is becoming a hot-spot for alternative travel made attractive by a year-round sunny disposition, pearly white sands, turquoise waters and splendidly conserved and colourful colonial cities and towns.

Cape Verde is composed by ten volcanic islands divided in the Ilhas do Barlavento (the northern islands which are: Boa Vista, Sal, Santo Antao, Sao Nicolau, Sao Vicente and the unhabited Santa Luzia) and Ilhas Sotavento (the southern islands: Maio, Santiago, Fogo and Brava). Both the northern and southern islands boast stunning natural scenery in the interior and immaculate beaches. The volcanic origin of the island bestows some of the most spectacular backdrops in the world. Whereas the islands of Sal, Boa Vista and Maio present more desertic features including salt flats and dunes, the remaining islands are decidedly more lush and tropical.

Making Cape Verde even more idylliac is the archipelago’s position at the 16th northern latitude. This means attractive sunny temperatures all year which are milder than the climate of the African mainland. Coupled with the moderating effect of the Atlantic that make the waters surrounding the islands warmer than normal oceanic temperatures.

The Portuguese were the first to arrive on the islands in 1462, finding them uninhabited. Cape Verde was sadly used almost immediately as a stopping point in the international slave trade. It also became prosperous as a safe port for pirates, privateers and buccaneers. Centuries of struggle later and the mostly mixed-race population led by champions such as Amilcar Cabral, gained its independence. The country is now one of the most developed countries in Africa nowadays focusing almost exclusively on services and tourism, due to it’s lack of natural resources.

The Islands of Cape Verde

The largest and most populated island of Cape Verde, Santiago is somewhat snubbed by tourists as some may find it congested and busy. For history buffs and trekkers though, it is the absolute best the nation has to offer.

Praia, the capital, is a bustling city with over 150 000 thousand inhabitants with a vibrant street life and a rich history reflecting its multi-ethnic past. Main sights include the San Felipe Fortress, a clear testament to Portuguese dominance. The Presidential and Justice Palaces together with the Igreja Martiz church are other structures built in the 18th century that capture the colonial essence of the city. Other sights are the Albuquerque plaza (main square of the city), Via 5 de Julho (the main thoroughfare), the Diogo Gomes monument (named after the famed explorer who discovered the island), Museum Etnografico and the always active Sucupira market.

Santiago’s pearl though is undoubtedly Cidadhe Velha, the original capital of the island and the oldest settlement in the country. Founded in 1462 with its pastel coloured and exquisitely preserved colonial townhouses. It deservedly takes its spot as both a UNESCO world heritage site and is one of the Seven wonders of Portuguese origin in the world.

Although a number of other Cape Verdean islands may be more renowned for the natural vistas and beaches, Santiago also offers gorgeous backdrops such as the Serra Malagueta mountains that dominate the islands interior. Beaches include: Tarrafal, Praia Baixa, Aguas Verdes (with its beautiful trail contoured by majestic baobabs) and the spectacular San Francisco bay.

Although mostly desert and there are not many things to do in Sal, it is still the most visited island of Cape Verde, thanks to the presence of an international airport. The Santa Maria beach is the main draw of the island, a lengthy beach that meets an azure sea that rivals any Caribbean, Polynesian or Mediterranean destination. Another attraction is Ilha do Sal (literally sea of salt which gives its name to the island) found inside the collapsed crater of the dormant volcano Pedra de Lume.

Another tourist stronghold, the two beaches: Praia de Chaves and Praia de Santa Monica are incredibly popular while the islands arid interior covered in massive sand dunes make the island seem like a miniature offshoot of the Sahara. Treks to the interior and the activities that come with it (including sandboarding and off-roading) make the island a fascinating desert destination.

If the previous entries are more recognised for maritime activity, Santo Antao takes the cake for excursionists. As it is the most western of the islands (making it geographically the most western appendage of Africa). The island’s landscape is the least affected by the continent’s dry ecosystem, making it the greenest of the archipelago. The island is a hiker’s paradise, dotted with deep canyons and gullies and tall crags and cliffs.

This southern island is dominated by its namesake, mount Fogo an active volcano 2882 mt high (last eruption in 2014) tours to the top of the caldera are active all most all year round. The spectacularly positioned town of Sao Felipe on the southern tip of the island dominates from the cliffs above an exclusive (because of its remoteness) black sand beach.

One of the smaller but still most visited islands, Sao Vicente betrays is rugged interior by being a centre of festivities, music and culture held in the cheery town of Mindelo. Nowhere like Sao Vicente is the internationality of the Portuguese heritage more visible. The town holds an intense carnival every year reminiscent more of South American (or should we say Brazilian) festivities than African or European, the influence of the other side of the Atlantic is very visible here.

As we get to the smaller islands, we must preface that for tourists these can be the hardest to physically arrive to due to their isolation and morphological conditions. Brava is famous as an up and coming bastion for eco-tourism especially in the area around the rocky peak of Mount Fontainhas. Sao Nicolau is also known for trekking in its spectacular interior, dazzling rock formations and its more laid-back appeal. This can be surmised by the peculiar Brazilian influenced creole that is almost unintelligible even to other Cape Verdeans.

Getting to the southernmost islands can be trickier due to sea conditions but Maio with its barren landscaped marked by acacias can be appealing to travellers who like to beat untrodden routes. The island still has charming beaches, but most tourists settle for the more known islands. Santa Luzia is a different story, as it is the only uninhabited island, special permission is needed by Cape Verdean authorities to visit as it is a protected marine habitat but snorkelling tours on the reefs surrounding the island offer some of the most remarkable glimpses of marine life on the planet.

Portuguese is the national language although a variety of creole dialects are spoken. As tourism is growing more and more Cape Verdeans in the industry can accommodate English, French and Spanish speaking tourists. The currency is the Cape Verdean Escudo valued at 1 euro – 110 Escudos.

What to do and When to go

Cape Verdes exceptional position make it a recipient of trade winds making it a growing favourite for surfers, wind surfers and kite surfers. The wild interiors on the other hand make for some unforgettable trekking, hiking and general exploring. The many colonial villages and warm disposition of the locals also mean some great times for tourists staying in town many of which offer an abundance of music festivals during peak tourism season. On this note the best times to go are during the dry season, from November to July, when winds are not as powerful and the cold temperatures at home (for Europeans and Americans) make the archipelago a welcome escape from winter.

How to Get There

Cape Verde has four international airports (mostly linked to European or African flights) in Sal, Santiago (Praia), Boa Vista and San Vicente which in any case are the best when it comes to tourist infrastructure.