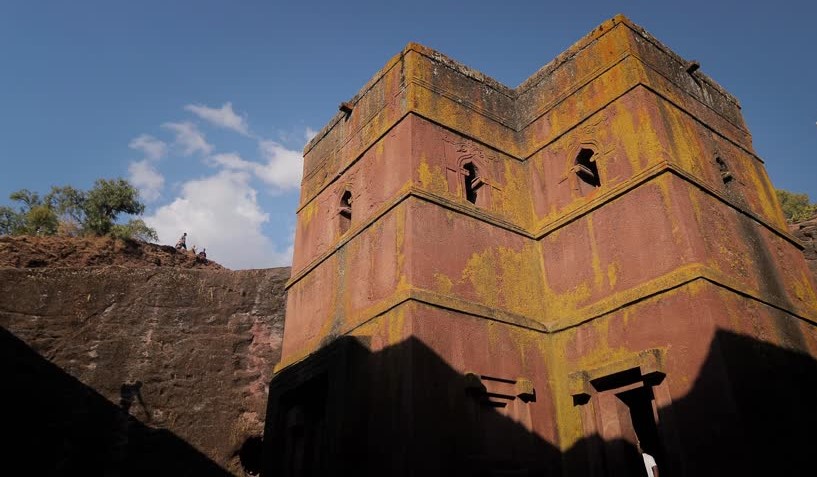 The first time I visited Lalibela I was seven, Ethiopia was a quite different then.

But things are changing. Despite its troubled past, Ethiopia is on the rise, the nation is the second most populous African nation and the continents fastest growing economy.

The country’s tourism potential is enormous, and its many landmarks are known to more intrepid travellers. Ethiopia is both beautiful and rugged, its history the most ancient in Africa, its origins, those of all mankind.

I returned to Lalibela in my 20s, I had yearned to see it through adult eyes and found myself experiencing almost identical emotions of wonder I had as a child.

The second time I visited was via a solitary 10-hour bus ride from Bahir Dar, the regional capital of Amhara at the mouth of the Blue Nile. For some reason the bus stopped short of the actual bus station and turned around, hobbling off precariously. It was at that point I noticed that there was no transport to the actual town and remembered that I was probably carried there as a kid.

The trek from my arriving point to the actual town was only about 3km and an experience in itself. My trepidation to see the rock-strewn churches again after years, meant that I avoided the town on purpose and went straight to Bet Giorgis or “Saint George” the postcard Lalibela church I know, but the image was burned in my mind as a child and I wanted to see if it had the same effect. It did.

Backtracking, I visited the rest of the churches (there are 12 in total) where I noticed something I had not seen as a child. Massive steel pylons surrounded some of the other shrines, including the fabled “Tomb of Adam” and the adjacent “Bete Maryam” propping up giant roofs protecting the churches from the harsh highland climate (Lalibela is 2600m above sea level).

I admit I was little taken aback from the realization of how precarious these structures are, as well as the unwanted contrast between modern in-your-face metal and plastic columns hovering over these monuments to human ingenuity. But when I realized the locals didn’t mind them as much as the many foreign would-be photographers complaining about the pylons ruining their shot, I almost started appreciating them.

I had specifically chosen to visit during a lull in the many religious festivities and pilgrimages for which the town is famous for. As a child we had gone during Timkat, the Epiphany, which according to the Julian calendar still in use in Ethiopia is around “our” 19th or 20th of January, with Christmas being celebrated around the 7th and 8th of January and festivities held non-stop during and for some time after the dates.

As an adult I had purposely chose (with just a pinch of regret) to visit during a less frenetic period, but it must be said, the festivities are absolutely mesmerizing, inspiring a sense of community, ancestral tradition and all-encompassing human empathy that has few equals in the world.

Coming back to Lalibela had a profound effect on me. I could cite a million reason and effects this return voyage had on me so all I can do is give some suggestions.

The most common way to get to Lalibela is by plane. Direct international flights exist but can set you back over 1500 euros. The cheapest way is an Ethiopian Airlines internal flight from Addis Abeba, costing around 120 euros (though prices can drop as low as 40). Alternatively, the closest bus routes start from Woldia (5-7 hours) or Bahar Dar (10 hours). Though the time-frame may seem daunting, the ride apart from being much cheaper, offers continuously stunning views of the Amhara region highlands and full immersion in Ethiopian day-to-day life (nothing else beats unreliable public transportation in bringing people together).

Hotels are a plenty in Lalibela. Starting at the equivalent of 15-20 euros a night, with many also providing guides that, if knowledgeable (lets just say some know their stuff more than others), can help greatly in navigating the subterranean tunnels connecting the churches as well as explaining the history of the site and meaning of the intricate orthodox Christian symbolism present in the form of paintings, sculptures and crosses adorning both the interior and exterior as well as other “secret” churches that would be missed without local guidance. For example, although I personally did not have a guide, I eventually eavesdropped on a conversation that brought to me to visit the last church on my itinerary, the “Temrehanna Kristos” monastery.

A few hours by car, weaving through the mountains that surround Lalibela, it might be one of the most visually stunning and astonishingly positioned religious buildings I have ever seen. Perched at 2600 metres under a small waterfall, although not carved out of the rock like its counterparts it can boast being a century older and having some of the most unique examples of Ethiopian orthodox frescoes in its interior, some over 800 years old. For a history student like me, this last destination was the secret spot to come back to.

I fondly remembered my first time in Lalibela as a child, not much has changed (for me at least) except maybe this time I can share the experience with others.