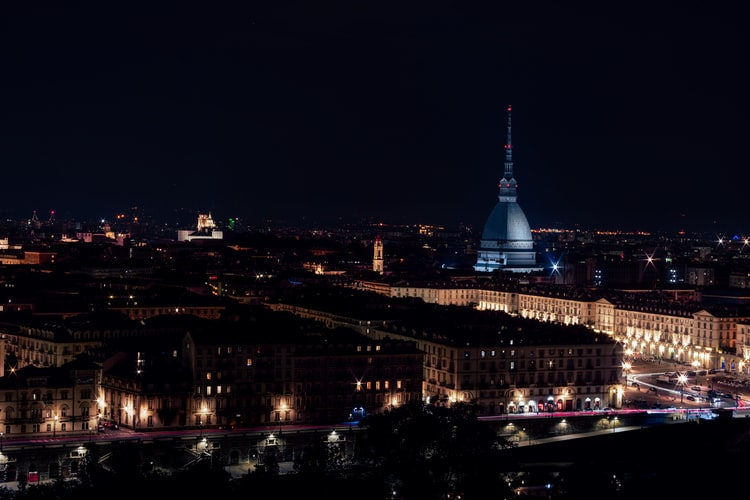 With so many iconic destinations to choose from in the Belpaese, it’s only natural that some cities, regions and locations get way more attention than others. Turin is one such destination and definitely one of the places to visit in Italy.

The fourth largest city in Italy is known as an economic and cultural powerhouse internationally as the headquarters of FIAT, the birthplace of espresso coffee and the haven of one of the planets most successful and revered football clubs: Juventus (with an obligatory mention of their long-standing rivals FC Torino).

The city also serves as a bustling university town and as the refined, cultural hub of Italy “par excellence” with its countless opera houses, museums (more on that later), art galleries, gardens, theatres and majestic royal palaces presided over by the illustrious Savoyard dynasty.

The city came to prominence first as the capital of the influential duchy of Savoy and subsequently as the first capital of a united Italy. The grandeur of the city reflects its growing importance throughout the 18th and 19th century giving Turin a somewhat more distinguished exterior when compared to other more cluttered medieval or antique layouts of other Italian cities. The reason is both cultural and geographic as the town was notably influenced by nearby France, with its wide boulevards and splendidly adorned baroque, art nouveau and neo-classic palaces.

But Turin is known to others for more obscure reasons. Throughout many circles the city is frequently associated with mysticism, unexplainable occurrences, unusual energy fields, masonic lodges and the occult.

Among the ordinary things to do in Turin, we are here to delve into the esoteric side of Turin, fabled by chroniclers for centuries. It is not a coincidence that one of Christianity’s most mysterious and controversial relics is housed here: The Shroud of Turin. Other fables purport that the holy grail itself is to be found in the city and more precisely in the imposing Church of the Mother of God (a statue in the church supposedly points in the direction of the unfindable relic).

Nostradamus, the famed mystic resided for a time here and there’s also the small fact that Turin is located on the 45th parallel making it the only city where dark and light forces intertwine. On the dark side we have the triangle formed by Turin, London and San Francisco while on the side of light we have Turin, Prague and Lyon.

To fully explain this ominous association, we must start from the beginning, from the town’s foundation by the Romans in 28BC. Local Celtic populations had already built a first settlement later absorbed into the growing Roman Republic. This small bastion at the border of the republic was divided an eastern section where the sun rises, inhabited by benign forces contrasting with the western halve where the sun sets and the darkness settles. It was in the western section, for example, that the dead were buried.

This clarification brings us to our first stop: Piazza Statuto, one of the main squares of the city. In ancient times this marked the end of the Roman encampment and the start of the perilous road through untamed Gaul, the grand boulevard exiting the plaza moving westwards is called Corso Francia (Gaul was the ancient name for France). The whole area to the west of the piazza today forms the historic Valdocco quarter, but its Latin appellative for centuries was the Vallis Occisorum, literally the valley of the dead, the area once served as the main rounding point for criminals sentenced to death. To make things even more disturbing, archaeological finds routinely uncover evidence of a sprawling necropolis under the piazza.

Esoteric proponents point to Piazza Statuto as being the “black heart” of the city. A confluence of dark and demonic energy contrasted with Piazza Castello, considered a symbol of positive energies and light. Piazza Statuto also holds two very particular memorials which occultists point to as being shrouded with malignant origins and intentions.

The first is the Frejus Monument, a hulking structure built in the late 19th century to commemorate miners who worked (and perished) to build the Frejus passage, a tunnel built under a nearby mountain that made it possible for goods to travel between Turin and nearby France. The passage was an extraordinary and costly (also in human lives) engineering feat for the time.

The monument itself consists of a massive pile of rocks surmounted by a statue of a winged figure on the summit towering over deformed representations of the defeated Titans of Greek mythology. The original sculptors supposedly meant it as a symbol the prevailing of reason over brute force while popular rumours would have one believe the winged figure to be Lucifer himself standing over the bodies of dead laborers.

The second structure is a geodetic obelisk named after its creator the celebrated mathematician Giovanni Battista Beccaria. Though small and unassuming, this obelisk, apparently marks the passage of the 40th parallel and thus is the precise centre of the dark forces that reign over the city, with some popular traditions going as far as saying that the entrance of hell can be found under it!

The figure of Nostradamus, arguably the world’s most famous and enigmatic mystic is linked to the square as he lodged in the nearby Domus Marozzo. His presence in the city was said to be related to curing Margherita of Valois’ sterility. Could he have been in Turin for more other more otherworldly reasons?

Next on our spook-quest is the Egyptian Museum. It is the oldest museum purely dedicated to Ancient Egyptian artifacts. It houses the second largest collection of Nilotic relics after the Cairo Museum and is one of the cities most recognized and hailed institutions. Its overall mysteriousness stems from it housing a myriad of objects that are said to emanate both positive and negative energies including repertoires from the famously cursed Tutankhamun and Ramses collections but also effigies of malevolent or vindictive Egyptian deities such Set, Ptah and Osiris.

The fact that the museum is housed in a sprawling 17th century palace whose underground chambers were said to be the base of operations of alchemists and mages all but increases its supernatural reputation.

A small parenthesis could be opened on the three supposed “Alchemists Caves” of Turin, a series of underground passages said to contain secret meeting places of influential practitioners of the occult and in some cases be actual gateways to different dimensions or housing legendary artifacts such as the Philosophers Stone. Underground tunnels have been uncovered, though they were most likely commissioned by Savoyard nobles for military and emergency reasons, but who knows what other passages remain secret to this day.

Next, we have the “Palazzo del Diavolo” literally the “Devil’s palace”, with such a charming name it could not have escaped our list. This Liberty-style palace nowadays houses a bank but its entrance is privy to some of the city’s most outrageous rumours and anecdotes. The giant mahogany door displays an intricately adorned doorknob that represents Satan with two golden serpents as handles. The strangeness does not end here.

Construction of this door dates from the 1600s and in popular tradition, it sprung up suddenly and magically one night. Legend dictates that an apprentice mage tried to invoke the Devil’s presence who in turn trapped him in the palace for all eternity. To make the story even more sinister, a preserved skeleton was found in an upright position trapped in the walls.

The palace itself (Palazzo Trucchi di Levaldigi is the name) has been the stage of numerous frightening occurrences, murders and eerie coincidences and is believed by most to be genuinely haunted. To top it off the address of the building used to be number 15, the number associated with the devil according to tarot cards. The palazzo’s current address, Via XX Settembre is on the same avenue the Cathedral of Torino is found, the very same cathedral that houses the Shroud of Turin.

Our last stop is in Via Lascaris, another inconspicuous street that holds yet another dark secret. On this quiet street is a building (a bank, again). Tourists of the occult flock to this area to investigate two strange fissures in the ground near the entrance of the bank (that obviously used to house a masonic lodge). The two holes look weirdly enough like eyes, which are? You guessed it, the devil’s eyes.

So, there we have it. This last “landmark” is a bit of a tongue-in-cheek example of mystifying otherwise normal things (in this case two holes in the ground) into something unnatural. Turin is in fact a perfectly normal city which should be visited for its stunning architecture, vibrant ethos and gorgeous alpine surroundings. But deep down one can sense that the city is exceptional in a different unpalpable way, maybe the stories are true, and this cryptic town hides more secrets than it displays.