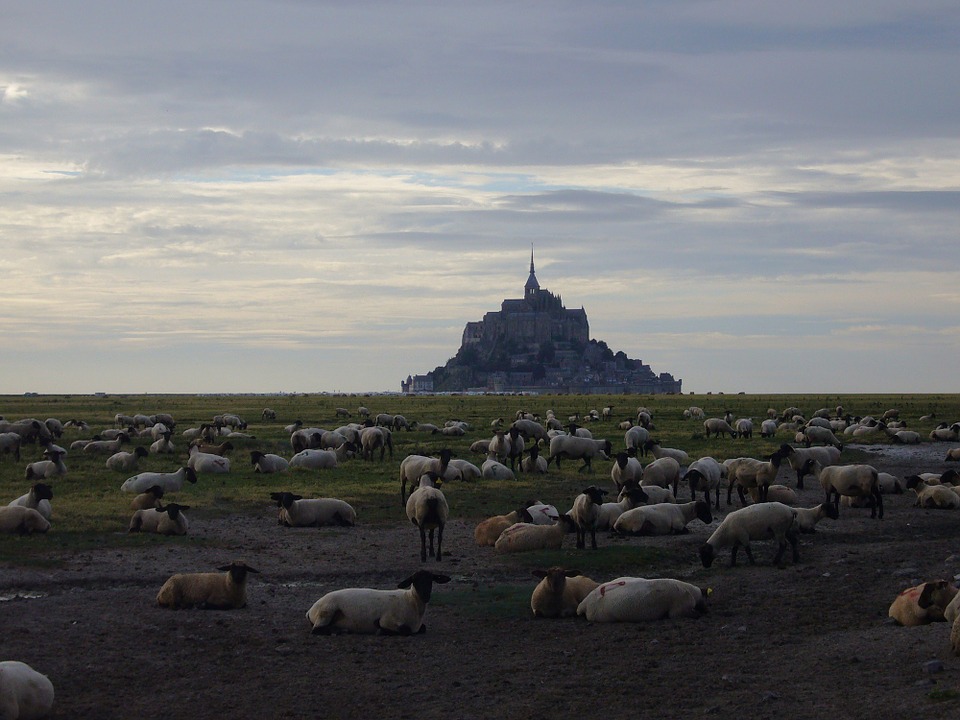 Our journey through Normandy continues. Moving westwards from Honfleur we arrive at the capital of the Calvados department: Caen. The city is a provincial hub, most famous culturally for its bond with William the Conqueror, whose legacy can be seen in its four main monuments all classed as Monuments Historiques, the designation given to national heritage sites in France.

The Château de Caen is one of the largest castles in Europe, built smack dab in the centre of the city with its environs growing around it. The duke of Normandy and future first king of a united England then commissioned the construction of two great abbeys: The Abbaye aux Dames or Abbey of women was purportedly built in expiation of William’s sin of marrying his own cousin and to this day serves as a Benedictine convent. By contrast the Abbey aux Hommes or Abbey of Men is a Benedictine monastery and is one of the most impressive examples of Romanesque architecture in France, and the site of the Conqueror’s burial place.

Caen also hosts one of the largest botanic gardens in France; Les Jardin des Plantes de Caen notable for its organization of workshops concerning environmental issues and welcoming attitude of its gardeners who frequently trade knowledge and gardening know-how with interested attendees. Another landmark is the church of St Etienne le Vieux, one of the oldest in Normandy, still standing after being damaged during both the Hundred Years War and WWII.

Let’s get to the nightlife though. As its University has more than 30 000 students, the city is full of watering holes, clubs and other venues dedicated to entertainment. A visit to Rue Ecuyere is warranted with its many dive bars, pubs and discos. Some of the most popular spots include “Vous etè Icì”, “le Bar 23” (and its disco counterpart “Club 23”), “Le Trappiste”, “L’Hydropathe” “Au Chef Raide”, “Club” and “Chéz Paulette” are just some of the spots for locals, students and tourists to cool down or let loose after hours. The Belgian Delirium franchise also has a very popular foothold in the area.

After partying its back on the road. Our next destination is Bayeux where the famous Bayeux tapestry is conserved in the village’s magnificent cathedral. A must see for history buffs, the tapestry, which depicts William the Conqueror’s victory at the battle of Hastings, has survived intact for nine centuries and is considered the most preserved example of secular Norman Romanesque art.

We move from Bayeux toward Vierville Sur Mer, although its French name might not mean a lot to English speakers this was the site of the infamous D-Day landings during WWII; the infamous Omaha Beach (four other nearby beaches were the site of landings: Gold, Utah, Juno and Sword) immortalised in films such as “Saving Private Ryan”. Although the mood can seem sombre it is still one of the most visited stretches of coast in the world and should be seen as a reflection of the folly of war.

From then on, we come to the last and longest stretch of our journey, from Viervilles to Mont St Michel. The name only, arouses wonder and astonishment. It is, after all one of the nation’s most recognised landmarks. Built on a small island, the area was fortified since pre-medieval times, becoming a fortress-monastery from the 9th century onwards. Its levelled construction epitomizes the feudal society of the time. From top down there is God (symbolized by the spire, abbey and monastery), the great halls of the nobles, housing for merchants and artisans and dwellings for farmers and fishermen beyond the walls. Its singular position means that the island was only accessible when the tide is low. In reverse it was used as a prison in later times.

A modern bridge was built in 2006. Before then, accessing the monastery for pilgrims or invaders was extremely dangerous (and still is if attempting to cross beachhead during the low tide, as it is very unpredictable). A testament both to humankind and nature, the the main structure has remained undamaged for centuries. Mont St Michel couldn’t have been a better ending for our journey, and truly shows how just one corner of France can be enough to inspire both pleasure, entertainment, culture and overall marvel for a lifetime.

Relating also to the previous article, Normandy is a region that offers something special in each one of its five departments (Calvados, Eure, Manche, Orne, Seine Marittime). In this article we visited and highlighted six destinations in Calvados and one (Mont St Michel) in the department of Manche.

Total travelling distance amounts as such: From Rouen to Honfleur 92 km both on toll roads (A29 and A150) and no toll freeways (A13). It would be advisable to spend at least one night in both Rouen and Honfleur where hotels, bnbs and hostels are more readily available. From Honfleur to Caen 67 km (A13, some sections have toll booths). We strongly advise to stay in Caen as a base to visit both Bayeux and Vierville, which are respectively 30 and 50km away (N13 highway) and can be visited in one single day trip. Here is where things get tricky. From Caen to Mont St Michel the distance is 128 km using the A84 which does not have toll booths. Bnbs and hotels in Mont St Michel and the surrounding area are quite expensive though so we advise either a round trip back to Caen or as a last resort, booking accommodation in nearby Avranches, Courtils, Granvilles or Le-Val-Saint. One can always just continue travelling in any direction from there, as tempting as it may seems, but the cheapest flights in an out of northern France are usually found in the Paris area (Beauvais or Charles de Gaulle).