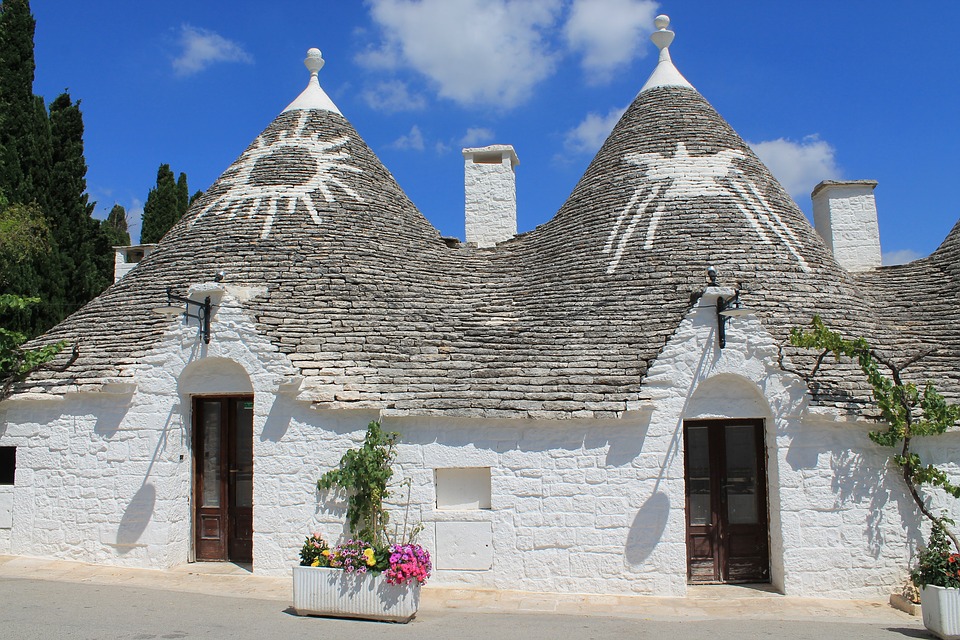 Alberobello and the Trulli

Apulia is the region in Southern Italy that occupies the heel of the peninsula. It is known for the dazzling blue sea of the Salento, the rugged white cliffs of the Gargano and the interior made of rolling hills and sun scorched plains scattered with olive groves, vineyards and masserie (the name of old farmhouses storing wine, olives and other produce that are a symbol of the Apulian countryside).

Roughly half way across the region lies the small town of Alberobello, home of the Trulli.

The Trulli, put simply enough are houses following building techniques straight out of a prehistoric fantasy world. This isn’t too far off from reality. These structures more than any other surviving edifice, resemble ancient greek tholòs, which were built as mausoleums with oriental influence. The difference between the Trulli and ruins in Greece or the near Orient is the fact that people still live in them to this day.

In reality the construction of the Trulli dates to much more recent times. More precisely in the 1500s when a local law started heavily taxing any new properties. Farmers who passed down the ancient knowledge of building sturdy conical buildings out of dry stone, where they would store wine, olives and other produce started to construct larger Trulli to live in.

These buildings made of a type of dry stone that is plentiful in the region, were easier to rapidly demolish in case of inspections. The circular layout of the houses was easier to build with the stones available, and the roofs were lined with beaten hay and darker stones often adorned with mystic symbols by the original builders, conferring an ancient enchantment to the eyes of the visitor.

Starting from the 17th century, the laws became more lax and the building of entire villages made in this particular fashion remained. This culminated in the construction of the Trullo Superiore a 14 mt high Trullo palace, the only with two floors, now converted into a museum. Nowadays, the central plaza which contains this king of Trulli holds international music concerts and events.

While the Trullo structure used to be visible in many villages around the Itria and Murgia valleys of central Apulia, the vast majority are now located in the Monti quarter of Alberobello where more than a 1000 Trulli remain and have made this small town one of the regions most visited locations.

Alberobello itself is a quaint town full of delightful slow food eateries, farmhouses transformed into bnbs, hostels and hotels. Easily reachable in train by Bari, the capital of Apulia. It is also close to some other stunning locations. In less than an hour one can reach the Gravine national park, sometimes called Italy’s answer to the Grand Canyon or visit nearby Altamura, famed as one of the culinary centres of the nation (especially concerning breads and local variations of pasta).

Three pearls of the Salento region are less than a half hour drive away. Monopoli (no connection with the board game) is one of the most active ports in the region famous for the many masserie that surround the city. Polignano a Mare is one of the most visited and recognizable towns in all of southern Italy. Its old town perched on a jagged cliff jutting out on to the Adriatic. Obviously the beaches under both towns are out of this world.

Lastly we have Ostuni, without a doubt the coup de grace, with it’s chalk white medieval buildings, churches and walls overlooking some of the most splendid beaches in the Mediterranean. The beach near Ostuni has won the “Bandiera Blu” denomination for beauty and cleanliness of its waters uninterrupted since 1988 making it by default the most sought after beach in Italy. Ostuni has been “colonized” by tourists (British and German especially have bought up swathes of real estate in recent years) but still has to be seen for it’s sheer beauty.

So visit Alberobello and be prepared to be mesmerized by the enigmatic and archaic Trulli and then get out and explore as much of the wonderful region of Apulia as possible. There are simply too many awesome spots to list here, so tune in with us again for a chart of the best beaches and localities of both the Salento and Gargano coasts.