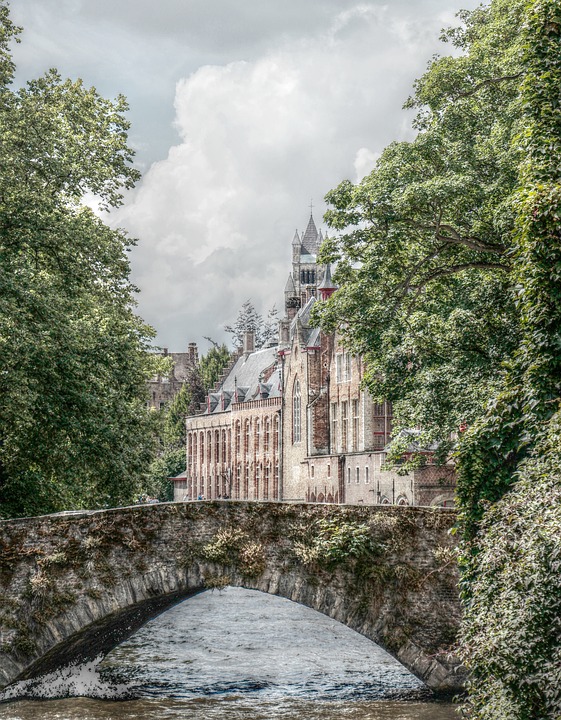 Discovering Bruges, the pearl of Flanders

Belgium as a country often doesn’t get the praise it deserves. This small country locked between France, Germany and the Netherlands has to contend with some touristic heavy hitters and is often the butt of “who in their right mind would go there intentionally” jokes (if you’ve seen the movie “In Bruges”, you’ll know what I’m getting at).

As someone who was born in the country, I am happy to report that this state of affairs has been steadily changing. Belgium is becoming a frequent destination for visitors from all over. Main reasons to visit Belgium are the idyllic and tranquil beauty of the Flemish and Walloon countryside, the world-renowned breweries, artisanal chocolate producers and the fairy-tale like medieval villages and towns perfectly preserved for centuries. Bruges fits snugly in all the categories mentioned.

One obvious feature of Bruges is the abundance of canals, water ways and bridges. Though not directly on the sea, the first settlement originated on the banks of the river Reie (the local word for canals is “Langereie”). As Bruges expanded the canals reached the North Sea, making it possible for merchants to access the town with their goods.

Bruges was in fact, an important port and trading station for centuries rivaling Antwerp and Amsterdam (it contends with the latter for the title of Venice of the North). Organized boat tours of the canals are a must. It is a dreamy experience to navigate the canals, especially at sunset with the medieval building’s flickering reflection dancing below in the water.

One of the main sights and symbol of of the impeccably preserved old town is the remarkable Belfort (or Belfry) tower. Rising a dramatic 87 metres, reachable by 366 steep steps, the tower dominates the city’s skyline and the Markt below. The Markt, once the location of the medieval market is now the main square and gathering point for both locals and tourists. This elegant plaza is surrounded on all sides by magnificently decorated buildings, some of which held the headquarters of the many trading guilds of the city.

Adjacent to the Markt we have Burg Square that marks the original position of the city. It could be argued that this is the actual main court of the city as the splendidly adorned City Hall can be found as well as Bruges’s main ecclesiastical centre, the Basilica of the Sacred Blood. This magnificent Romanesque church protects a vial that is said to contain drops of blood of Jesus Christ. The blood has been said to turn liquid during times of strife.

Another unique landmark is the Jeruzalemkapel (or Jersusalem chapel) a strikingly gothic church known for its macabre altar covered by skulls. It should be mentioned that Bruges offers an unusual balance between the morbid and jovial. The gothic architecture of many of its monuments and a number of quirky and odd venues (more on that later) contrasting with its fairy-tale setting.

As a cultural hub of the Flanders, Bruges’s hosts some truly top-notch museums. The Groeninge museum is a must for art appreciators. It’s collection (one of the most extensive of its kind) ranges from the Flemish primitives to Baroque, neo-classical and modern from works of Van Eyck to Magritte focusing on the maestros of Dutch and Belgian art.

Belgium is also one of the premier destinations for exquisitely crafted beers and ales. For those most versed in “liquid” culture, the Bruges Beer Museum offers an interactive tour of the centenary tradition of Flemish beer brewing. One of the oldest breweries in town is the De Halve Maan that also offers a tour of the beer making process that finishes with a freshly brewed beer on a rooftop showcasing a magnificent view of the city. Other premium drinking spots are Cafè Vlissinghe holds the title of oldest pub in Bruges (celebrating 500 years of activity in 2015) and De Bierboom a pub and beer vendor with over 150 different types of brews.

Aside from beer, Belgium’s national pride is chocolate. Choco-Story is one of the world’s most extensive chocolate museums while the Chocolate Line is a chocolate shop presided over by “shock-olatier” Dominique Peersone. His unconventional chocolate making methods have earned him global reputation. Some of his combinations include chocolate tasting wasabi, tobacco and even bacon!

Bruges is a vibrant and vivacious city, full of hip bars, clubs and venues that cater to every need. As mentioned before some of these venues verge on the quirky side of things. We start with the Cactus, an open-air music park that hosts an annual festival visited by thousands with some of the biggest names in pop, rock, hip hop and electronic music. The Republiek is a grandiose bar that doubles as an underground cinema, whilst the De Werf and Bar Jus are some of the most renowned jazz lounges the city has to offer.

We finish with supremely odd Lucifernum which just has to be mentioned. Part speakeasy part art gallery and abode of its charismatic owner, self-proclaimed vampire Willy Retsin. 10 euros grants one access to a truly bizarre and unique experience. Retsin hosts a curious and crazed collection of all things gothic and morbid, it is one of the most singular venues out there and truly encapsulates the dual nature of this city equal parts enchanting and refreshingly peculiar.

Bruges is truly a uniquely amazing destination in every way. With plethora of things to do in Bruges, this article only scratches the surface of all the experiences it offers. I could go on and on and talk about visiting the surprisingly welcoming beach (only 20km to the North), or taking carefree bike rides immersed in the charming Flemish countryside or even visiting the national museum of Belgian style potato chips but one must go themselves to really experience it.

Bruges is already somewhat of a tourist hotspot so flights to the local Ostend-Bruges airport are abundant as are hotels, hostels and Bnbs so if you’re looking for a simply singular European destination; Historic, cultured, lively with a just a touch of weirdness, Bruges is one of the best places to visit in Belguim.