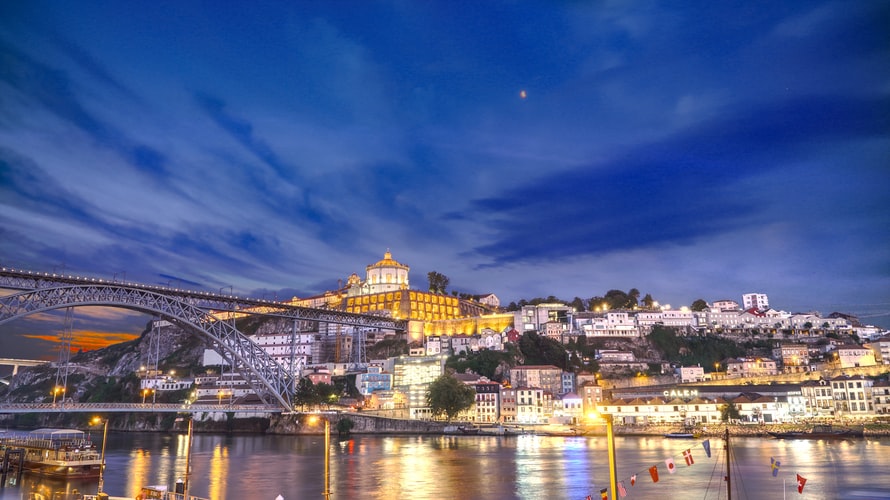 Porto (Oporto in Portuguese) is a remarkable and extremely endearing city, blessed with a kind of mystical quality that remains long after one has left. The second largest city of Portugal, located in the northern part of the Lusitan nation, nestled along the estuary of the Douro river, flowing into the Atlantic.

The city’s centre is a UNESCO heritage site and a vital checkpoint of the Portuguese tract of the Camino de Santiago. The people of Porto, who were once renowned as hardy sea people, central players of the many conquests and vast expansion of the Portuguese empire, are now recognised as warm, laid-back and amazingly affable, heralds of Portugal’s multifaceted cultural heritage around the globe.

We start our tour from the elegant Sao Bento train station with its splendid atrium covered in vividly blue coloured “azulejo” tiles. A short distance from there we stumble upon the opulent Sè cathedral, from which one can enjoy a gorgeous view (one of many) of the initial part of the Douro embankments and charming glimpses of Porto’s old town and it’s still remnant 15th century baroque houses. From there we descend the characteristically steep cobbled medieval alleys to the picturesque Ribeira quarter, coasting the docks on the other side of the 19th century Dom Luis I bridge, a “modern” symbolic landmark of the town.

This area is renowned for its picturesque sights, trendy locales and frizzy nightlife. A mainstay of Porto’s tourism (which makes sense as its name literally means “port) are guided boat tours under the six main bridges of the city on traditional “rabelos” (still used to transport Port wine down the Douro river, but more on that later).

The sights of the older and newer quarters alike, perched high above the many hills that still give the town its ancestral configuration are truly astounding. Main sights in the quarter include the Casa Do Infante, dating from Roman times and the old Miragaia neighbourhood.

For cultural and historical aficionados, Porto’s main cathedrals must be visited. The first on our list is the magnificent Igreja de San Francisco, a gothic church noted for its outstanding baroque exterior and lavish golden covered interior, earning it a spot on the UNESCO heritage site list. The superb Porto Cathedral is next, the main worshipping edifice on the city is also reputed the oldest building still standing, it’s first structure dating to the 12th century.

The massive exterior and belltowers can be seen and heard from multiple vantage points and its interior features striking contrasts between dark gothic elements (including the standard panoply of gloomy relics, mummified remains of saints, bishops and nobles) and splendid azulejo murals that traipse the main hall and numerous crannies and tabernacles.

Azulejo tiles are the characteristic ornamental tin-glazed blue ceramic tiles that feature in many palaces and churches (but also homes, restaurants and bars) all over Portugal and to a lesser extent, Spain (as the artform was originally introduced by Arab artisans) as well as the many countries dominated or influenced by the Portuguese from Goa, India to Sao Paulo, Brazil.

Porto’s many aristocratic palaces also showcase the dominant position the city held during the Age of Exploration. The Episcopal Palace located on one of the highest positions of the town is a gorgeous example of early Romanesque (dating at least from the late 14th century), modified through the years with baroque and rococo elements.

Palàcio da Bolsa (which hosts the city’s stock market) presents more Neo-classic features. Located in the beautiful Jardin de Bomfante square, beside the Igresias de San Francisco. Guided tours in the breath-taking Moorish Revival Arab room (a style that not only exemplifies the Arab influence in the Iberian peninsula but that was all the rage in the late 19th century) are some of the most popular in town.

From the Palàcio da Bolsa we move towards the Foz quarter, the western most district, directly facing the Atlantic. Avenida da Boavista is one of the main arteries of the city and ends in this quarter, linking the oceanside to the more central districts that also offer some spectacular examples of futuristic architecture. The Foz area is also home to the alluring gardens of Serralves, an open space museum, home to one of the most important institutions of its kind in the world.

The open air exhibitions of modern art and architecture have been in place since its inception in 1999 by architect Alvaro Siza Vieira, and today it is one of the 100 most visited museums in the world, with a yearly attendance of more than 1 million guests. Rua Miguel Bombarda is also extremely prominent in the modern art and designer scene, hosting a plethora of independent art galleries, concert halls, artsie bars and cafès and other such cultural institutions that contribute to the vibrant vitality of the city.

Remaining on the subject of art and culture, Casa da Musica is also a must-see location. As its name implies it is one of the city’s (and nations) premiere concert halls, its futuristic design attracts artists and orchestras globally. The location is also known for the sprawling Avenida dos Aliados, Porto’s main shopping boulevard and one of the most expensive streets to live in all of Europe.

This more modern and liberty-style influenced area of the city is noted for its nightlife and artistic inclination (especially in the field of ultra-modern urban architecture). Nearby is the great Cordoaria park which hosts some of the most important year-round sculpture exhibitions on the continent.

A city of temporal contrasts

Contrasting modernity with the city’s rich past is one of, if not the main symbol of the city, the marvelous Torre dos Clerigos. Built in the 1700s by the great Italian architect Niccolò Nasoni, it is truly one of the most astounding and recognized monuments of the city. At the top of its spire one can enjoy spectacular views of the city, the surrounding hills of the Douro valley and the tumultuous Atlantic Ocean. Rua Santa Catarina is another main thoroughfare, flanked by countless bars, restaurants, cafès and shops. A visit to the touristy but still iconic Caffè Majestic, an Art Nouveau edifice reminiscent of the Parisian Belle Epoque is still warranted.

We could not speak of the wonderful city of Porto without mentioning the principal product the city has generated for centuries. A liquid as vital to the city’s economy as the river whose waters flow through it and the ocean that crashes against it. This wondrous commodity is Port wine. All along the Douro valley one can take part in tours that specialize in this original brand of fortified wine (Port wine can legally only be called that if it originates in the area).

But all the cellars and wineries of the region coalesce in the city of Porto and more specifically on the shores of the Ribeira quarter that hosts some of the towns most established vineries. As there are too many to mention, specialized tours are much advised, though almost every bar and restaurant all over town offer variants of this potent liquor, together with even more unique “green wine” a specific staple of northern Portugal’s enology.

On the gastronomical side Porto is famed for an amazing array of delicacies including Bolinhos: A vital culinary mainstay of the city consisting of fried cod. Following suit are the simply scrumptious Francesinha sandwiches together with all the sea-based delicacies the Eastern Atlantic has to offer.

Speaking of the Atlantic, a whole new article could be dedicated to the amazing beaches that surround the city. There are too many to count (a special mention goes to Praia de Matosinhos, Praia do Ourigo, Praia da Luz e Praia do Molhe and Espinho, though the latter is a bit further from the city) but going either to the north, coasting the Costa da Verde or south along the Costa Praia, the choices are almost too many to list.

Porto and Portugal’s immense and wild beaches in general are some of the most beautiful and characteristic of Europe. As they face the mighty currents of the Atlantic, Portugal’s sea has nothing in common with the much more placid Mediterranean and are famed especially by the surfing community.

With this we finish our tour of Porto, a city that offers almost too much, from its magnificent historical landmarks to its vibrant and always innovative art scene to the ever present occurrence of delectable Port wine, Porto will always have a place in the heart of every person who visits.