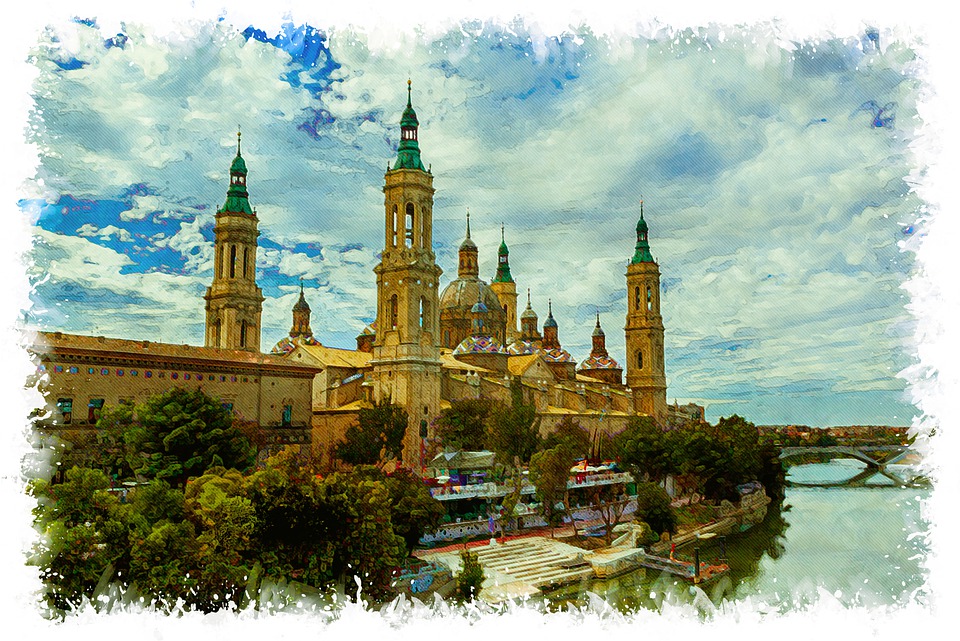 The fifth largest city in Spain with over 700.000 inhabitants in its metropolitan area. Capital of the province of Aragon (and the millenary kingdom that bore its name). The city is a centre of Spanish culture, underlined by the plethora of UNESCO heritage sites scattered around the old town. Zaragoza should definitely be on your bucket list of places to visit in Spain. The many architectural wonders in the Mudejar style are due its position as a crossroads of Castilian, Moorish, Catalan and French culture.

Visiting Zaragoza can be a real breather especially when compared to other frenzied, jam-packed destinations around the country (Costa del Sol, Ibiza and yes even Barcelona have to contend with hordes of tourists every year). Zaragoza is still unencumbered by masses of tourists so pacing up and down its cobbled streets is of great respite for a more relaxed and culture-oriented holiday.

Zaragoza enjoys a superb position at equal distances (about 300km) between Madrid, Bilbao to the north and west and Barcelona and Valencia to the south and even Toulouse in nearby France. Being accessible as a day trip from Madrid, it makes a great starting point for excursions to other towns or nature treks in the nearby Pyrenees. The city is an economic and industrial powerhouse of the north-east that also headquarters the top medicine university in the country accounting for its large student population bolstering its already dynamic cultural and entertainments scene.

In that respect the Fiesta del Pilar (more on that later) is the towns premium festival, attracting thousands of visitors from all over. The Zaragoza fair of 2008 effectively jump started the city’s notoriety as a hidden gem on an international scale with a recent increase in tourist-oriented services such as hotels, restaurants, cafes and tapas bars.

Geographically the city sits on the mighty Ebro river that dominates the cityscape, Zaragoza’s position in a basin surrounded by mountains confer an agreeable Mediterranean climate despite the somewhat northern location. This clashes with the immediate surroundings of the city which contrast fertile and humid valleys in proximity to the Ebro tributaries with the Monegros desert to the east. An extremely popular destination for nature enthusiasts also famed for its annual international electronic music festival.

The more fertile parts accosting the river, is what attracted the first Gallo-Iberian founders of the city who named it Saladuba before Roman colonisers changed the name to Cesareaugusta and finally under Moorish dominion who named the city Saraqust.  Both Moorish and Roman mementos remain in the form of palaces, towers and reconverted mosques for the former and the city’s square formation and ruins of the ancient forum, theatre and bathhouses for the latter.

The city’s history is intrinsically connected to the advent of Christianity in Spain. It is said that Zaragoza was where the Virgin Mary appeared to the apostle James (Santiago in Spanish, who is said to have voyaged to Spain to convert the local Celtic population) and ordered him to build a church where she stood. This church is now the Great Church of our Lady Pilar, arguably one of the two most important pilgrimage sites in Spain together with the apostle’s tomb in Compostela. Of note is also the Puente de Piedra, the mighty stone bridge that traverses the Ebro and has united the two halves of the city for 700 years.

In fact, one of the most beaten routes of the famous Camino di Santiago starts from Zaragoza. The church took almost two centuries to complete in its present Baroque form and inside it hosts some of Goya’s most celebrated paintings and frescoes. Tied to this is the Fiesta del Pilar, one of the most important festivities in the whole nation as it ties into the celebration of all Spanish speakers of the world (A celebration called El dia de la Hispanidad). On the 12th of October the city brims with life as marches, corride, street dancing, fireworks and unbridled festivities take over the town.

Walking around Zaragoza is undoubtedly the best way to appreciate it. Public transport is also extremely efficient thanks to the Zaragoza-card that doubles as a get in free or discount ticket for many of the city’s most interesting museums, restaurants, clubs and bars.

Our first landmark is the city’s second most important cathedral (although it is actually larger and more grandiose) the imponent Seo Del Salvador, a masterpiece in full Mudejar style. This style represents the pinnacle of elegance in Aragonese architecture. One must remember that in medieval and even early modern times the kingdom of Aragon was a separate entity from the rest of Spain.

The Aragonese developed a very distinct culture and architectural style that seamlessly blended Moorish, Romanesque and Spanish Gothic styles that give the city its elegantly distinctive appearance. The churches and palaces in the Mudejar style are all UNESCO heritage sites. Other splendid churches built in the style include the church of San Magdalena (notable for its beautifully intricate decorations of its bell towers that were once minarets), the church of San Miguel, the church of San Pablo and the aptly named Iglesias Mudejar. Though the city is known for its spectacular religious sites, Zaragoza’s coup de grace is without a doubt the majestic Aljaferia Palace.

This fortress was built in 11th century during the Moorish dominion when almost of all of Spain was ruled by various semi-independent muslim kingdoms or Taifas. The fortress is routinely included with the trio of great Islamic palaces of Spain together with Alhambra of Seville and the Royal palace of Cordoba. The splendour of its interior ornamentation contrasts with its hulking exterior that placed the citadel at the centre of countless sieges. A testament to this fortress being at the centre of Aragonese events for hundreds of years is cemented by the fact that the regional parliament of Aragon or Cortes is held in the palace to this day.

After a day of hitting up churches and palaces Zaragoza offers many places to relax, unwind and eat. Aragonese cuisine is famed for its take on Spanish mainstays influenced by alpine and eastern influences (not only French but Southern Italian as the Aragonese ruled over the area for centuries). Hearty wines coupled with intense cheeses are followed by plates of cured lamb while specially prepared eels and cod are also famed in the region. Not to open a whole chapter on Aragonese cuisine but egg-based dishes are quite common with one plate worth of mention: Huevos Tontos, literally “stupid eggs” that are a common street food.

The centre of entertainment, bars, restaurants and high-end shops are found along the city’s sprawling Avenidas such as Via Indipendicia, La Sagasta and La Gran Via and the main squares: Plaza Paraiso and Los Sitios. Zaragoza’s nightlife is centred around the area around the Mercado Central and Los the Bolivia La Paz quarter with bars and clubs offering a medley of both modern and more traditional establishments.

With this we finish our tour of Zaragoza, though known especially for its history, churches and palaces the city and outlying territories offer so much more. Zaragoza Is definitely not a destination to sleep on!